By Dr. Allen Alper, PhD Economic Geology and Petrology, Columbia University, NYC, USA
on 12/3/2019
We learned from Ted Ellwood, President and CEO of Peloton Minerals Corporation (CSE: PMC, OTCQB: PMCFF), that they have made the decision to focus purely on the exploration part of the mine life cycle and to look for properties that have potential to interest a major mining company. Peloton holds three gold exploration projects, located in Elko County, Nevada, one of which is under option to Kinross Gold USA Inc., and one gold exploration project in the Virginia City Mining District, Montana, which is under option to Frederick Private Equity Corporation and African Metals Corporation. We learned from Mr. Ellwood that exploration programs are under way on all of the four projects. 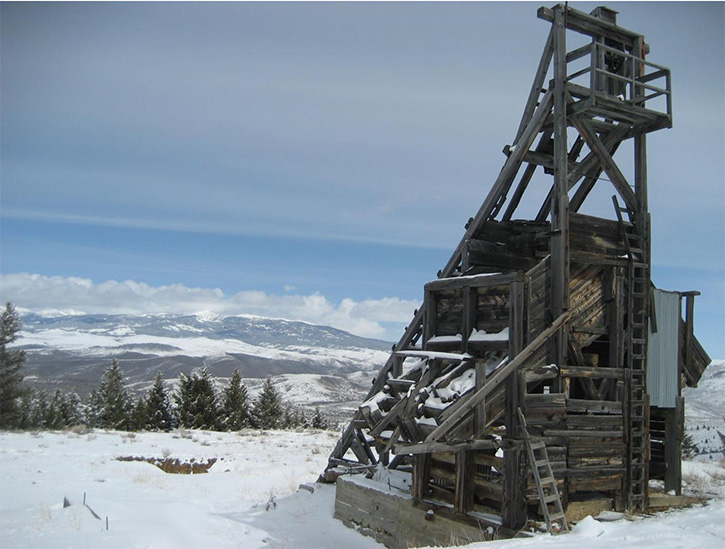 Ted, could you give our readers/investors an overview of Peloton and also what differentiates it from other companies?

Ted Ellwood:Peloton is a junior exploration company. I think one of the things that differentiates us is that we have made the conscious decision to focus purely on the exploration part of the mine life cycle. In Canada, the typical time for bringing a mine into production, after discovery, is about 15 years or even longer. I know that some of our shareholders have patience, but whether they have 15 or 20 years’ worth of patients is another story. So we focused on exploration. The idea being that we look for properties that have potential to interest a major mining company, either early on as a joint venture partner or ultimately to take us over for something that we’ve come across or developed.

Right now we have four of those kinds of projects in the pipeline or in the portfolio. I like to use the word portfolio because we really do approach it like an investment portfolio, where we’ve decided on a certain type of investment or asset and then we are adding them horizontally. It is just like portfolio investment theory, where diversification helps to lower your risk levels and then it still exposes you to the upside when new discoveries are made.

Dr. Allen Alper: It sounds great. Could you tell readers/investors a little bit more about the projects in your portfolio?

Ted Ellwood: We have four right now. We look at about 20 different projects a year, but we’re very selective picking them. We have one in Montana and three in Nevada. The Montana one includes two past producing gold mines that mined high-grade gold early in the turn of the century. 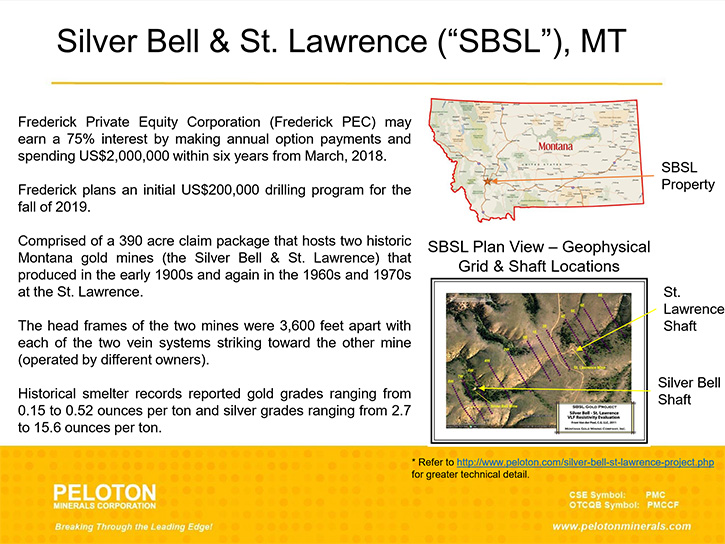 The shafts for these two mines were located 3,600 feet apart and they were owned by different owners. So when we acquired the property, our hypothesis basically was that these two old miners were probably mining on the same vein system, but back then, of course, they didn’t have the technology to tell them that.

Now, through modern geophysics, we’ve pretty much established that that was in fact the case. We’ve actually increased the strike length from that 3,600 feet to about 7,200 feet, based on geophysics. So it’s like a mile and a half. Now we’ve brought in a joint venture partner on that one from Toronto, a private equity firm, and they have just started drilling on that in between the two vein systems. The potential on that one is both on strike for 7,200 feet, but also at depth. Most of the mines in that particular region, the Virginia City mining camp in Montana, mined down to about 800 or a thousand feet, but these two both stopped at about a hundred feet, due not to the ore, but because of the economic conditions at the time. In the ’70s they were reopened and the underground workings were sampled extensively. The gold was still there, so we’re looking forward to this program that’s now underway. 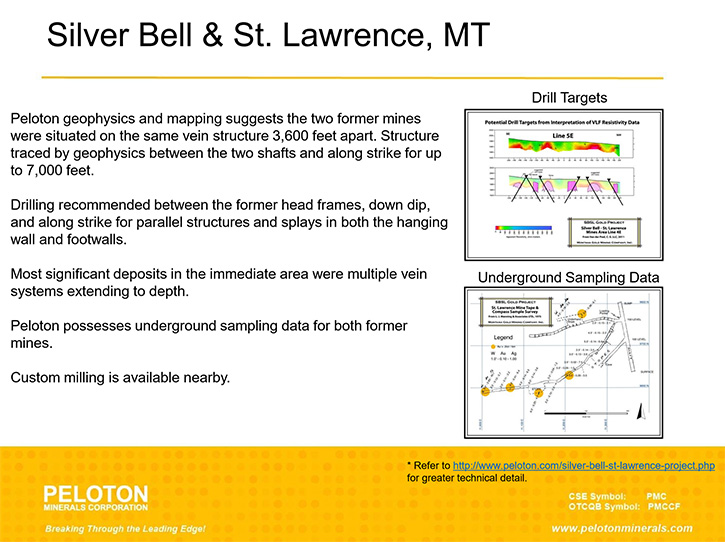 The other three projects are in Nevada and they are all Carlin style prospects. The Geologic Society of Nevada featured one of our projects, the Golden Trail, at the last GSN symposium in 2015. Another one of the projects is being submitted; we’re hopeful that it will also be included in the papers that are accepted for display at the next GSN meeting or symposium next year. The third project has been under option to Kinross Gold and they were drilling a deep pole this fall, as we were also drilling on the Golden Trail ourselves. On Texas Canyon, we were doing field mapping to be able to finalize a new 43-101 technical report and publish that later this year. 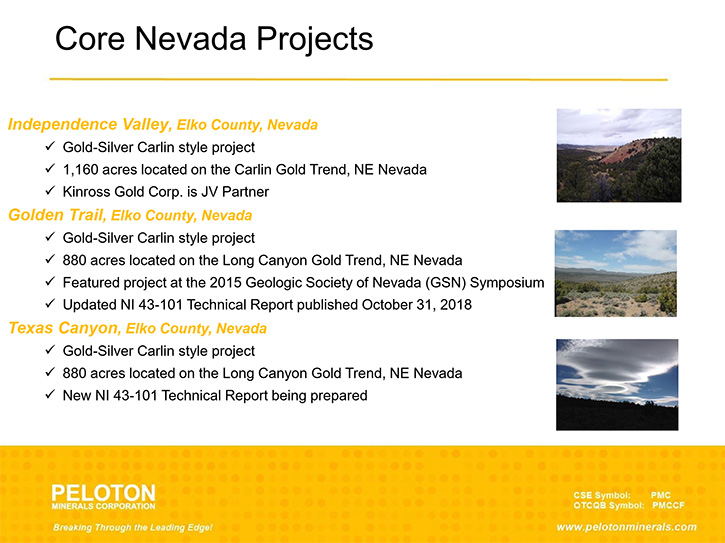 Ted Ellwood: Yeah, probably one of the most important things, for a junior mining company, is the experience and the background of the management, because there’s a lot that goes into the junior companies. And it’s not just geology. It’s a whole number of skill sets. Our Team, Directors and Management, have a combined total of about 300 years of experience, playing our various roles within the industry.

Myself, I come from the business side. I’m an MBA, but both of my grandparents were gold prospectors in northern Manitoba, Canada. From about the age of five, I was out there banging away at rocks with them, looking for gold. So I think the exploration career has come naturally to me. Over the years I’ve supported a number of exploration activities. We’ve made discoveries. We put a value-added cobalt refinery into operation, probably about 20 years too soon. But that’s another topic.

Our Chairman is a mining securities lawyer from Toronto, who is pretty well known. We have an environmental person on the Board, who owns a company that does a lot of the environmental remediation for the big Alberta oil projects. We have a mining engineer on the Board, who’s worked around the world on almost every continent. Our senior geologist is an expert in the Great Basin area of Nevada. He’s backed by a consulting geologist for Montana, who was formerly one of Barrick’s senior geologists. It’s a well-rounded team, with various skillsets, each of which are important to the success of a company like ours in this industry. 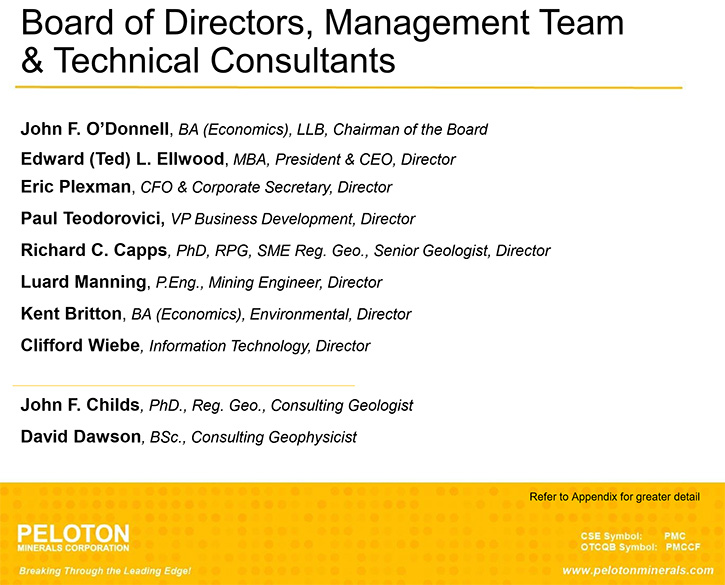 Ted Ellwood: Right! I often say you can’t just have geology or engineering. It takes a whole team. Even a discovery is typically made by a team rather than just one person.

Dr. Allen Alper: Right! That’s excellent. Could you tell our readers/investors a bit about your share and capital structure?

Ted Ellwood: We’re listed on the Canadian Securities Exchange. The trading symbol in Canada is PMC, so if you’re having trouble remembering that, just think of the Prime Minister of Canada as a way to remember the trading symbol. We’re also listed on the OTCQB market in the US and the symbol there is PMCFF, so you can trade our stock in both Canada and United States. The market capitalization is about roughly 8 million right now, so we’re not huge. The number of shares issued is about 80 million, so we’re trading around the 10 cent mark.

Dr. Allen Alper: Sounds very good! Could you tell our readers/investors the primary reasons they should consider investing in your Company?

Ted Ellwood: I think for investors looking for exposure to the junior mining sector and recognizing that some of the returns that can be had from the junior mining sector can be quite significant, as discoveries are made. That’s one of the reasons they might want to invest in the sector in general. Another is favorable gold prices. Also recognizing that exploration, by its very nature, is a risky business, our portfolio approach might allow the investor exposure to that industry and sector, while at the same time using our strategy to help mitigate the risk somewhat that’s potentially inherent in the exploration business. 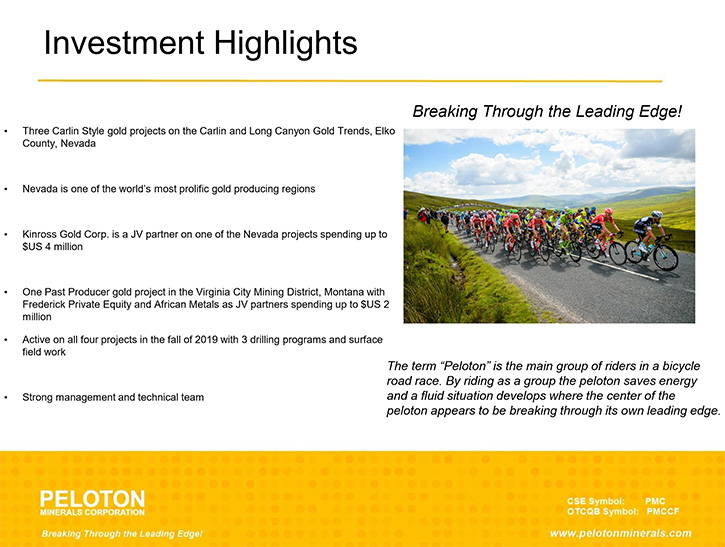 Dr. Allen Alper: Sounds like very good reasons for our readers/investors to consider investing and Peloton. Is there anything else you’d like to add, Ted?

Ted Ellwood: I think that pretty much covers the strategy and the people. In our last press release we indicated that we were going to be active on all four projects, with three drill programs and a field mapping program. That was a major milestone accomplishment in itself, just getting all four projects moving. It’s been a very difficult junior mining market, over the last five or eight years, in terms of being able to raise money to move projects forward. We know with a bit better gold price, there’s getting to be a bit more oxygen available in the sector. I was quite pleased to be able to say that we were able to move all four projects forward here this year. 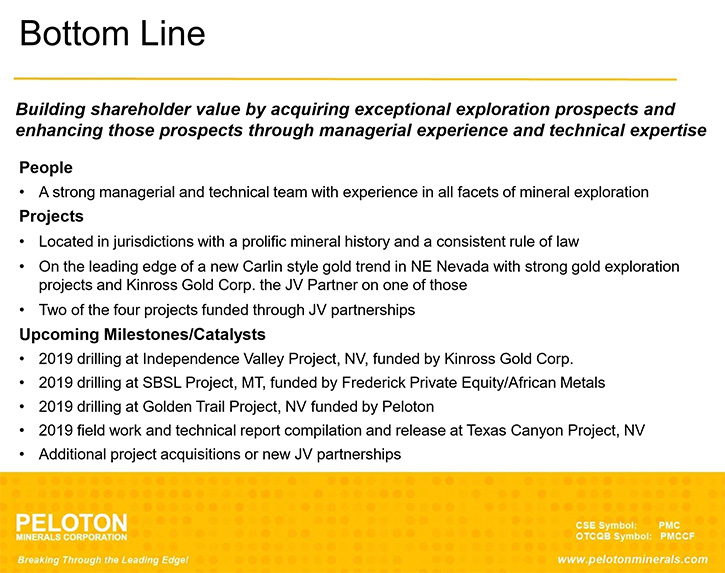 Dr. Allen Alper: Oh, that’s excellent! That’s a great accomplishment. Yeah, this has been a tough time and most people are saying that 2020 should be a turnaround time for the mining sector. So I’m crossing my fingers, since I’m also an investor and I would like to see the sector do better than it has been doing in the last five years.

Ted Ellwood: Yeah, for sure.

Dr. Allen Alper: We’ll publish your press releases as they come out so our readers/investors can follow your progress.

Back to the Blog